I know you all have been waiting patiently for the next book in my Extreme Medical Services series. Here’s an excerpt from the next book I’m busy writing right now. Jo, the teen witch introduced in book 4 gets herself in a little trouble at the Mall.

“Hello, witch,” the creature snarled. “I’ve been following you all day long. Have you been enjoying your last day on this miserable earth?”

Jo glanced back over her shoulder at the pile of clothes containing her pistol in its shoulder holster. She’d never get to it before the blade finished off Marian.

She thrust her hand in front of her instead and turned her head so that she was looking right down her arm, aiming at the demon’s head. What she had planned was not something she wanted to miss.

“Let my friend go and I’ll just send you back to hell.” A ball of blazing sunshine the size of a golf ball appeared in front of her outstretched palm. “Otherwise, beast, I’ll end you. You’ll not regenerate, you’ll be able to return in a hundred years, you’ll just be gone. Your choice.”

The demon met her eyes, then focused on the spinning ball of white hot plasma Jo held in her palm. She wanted it to make up its mind. Holding sunfire like this hurt like hell. She didn’t want to release the spell so close to her friend, but she might have no other choice.

“How do I know you’ll keep your word if I let your friend go?”

“You don’t. Five seconds and you won’t care.” Jo began counting down from five, wanting to scream in pain as the ball of the sun’s plasma started to cook the flesh of her palm.

The creature in front of her hesitated and then she saw the decision in its eyes as the arm holding the blade tensed and started to draw the hook towards Marian’s throat. With a scream of rage, Jo released the spell and the ball of fire shot forward, creating a miniature explosion that encompassed the demons head. Lifeless fingers dropped the blade and the corpse with the smoking head and shoulders collapsed to the ground as if a marionette cut the strings to a puppet.

Hope you enjoyed it. I’ll try and release some more bits and pieces soon. In the meantime, tell a friend about the books and if you haven’t picked up book 4 yet, the links are listed below. 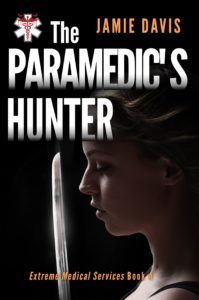 The Paramedic’s Hunter (Extreme Medical Services, book 4) is out while you’re waiting. Check it out and all the books in the series wherever your buy eBooks.

Kobo.com link (a free eReader app for all mobile platforms)

When paramedic and hunter are thrown together on a quest to rescue a kidnapped angel, who also happens to be Dean’s missing girlfriend, sparks fly. Throw in a powerful teenaged witch to join the quest, and they have a recipe for disaster, not a rescue.